INTERSECTIONS IN TIME with RUSS HUDSON

Intersections in Time that changed my life with Russ Hudson, by Marj Britt

In the late 1980’s, while I was in Walnut Creek, I ‘happened onto’ Don Riso’s first slim book on the Enneagram.  As I read the description of my ‘type’, I felt like I was totally seeing myself…sort of like for the first time.  What I had no possibility of knowing was that he would partner with Russ Hudson in writing and teaching and they would become, for me, the Voice of the Enneagram.  Seeds are planted.

Of course, it’s up to us to cultivate and follow through.  Now in Southern California, I learn that an Enneagram intensive was occurring in Santa Monica.  Don and Russ were co-teaching.  Going to lunch, Russ just happened to be walking behind me and a friend and I spontaneously asked him if he would like to join us as we turned into a small café. 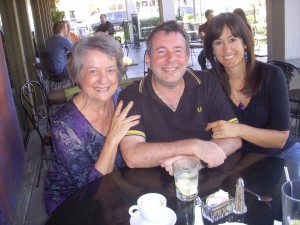 It was the beginning of Russ coming many times for multi-day intensives and being part of the emerging Campus of Consciousness that I have seen so clearly in vision.  Don Riso came once…after that it was only Russ.   Classes on the Enneagram became an on-going part of the curriculum of transformation for many years.

One of the greatest gifts Russ could have ever given me was when he said that he loved to come to Unity of Tustin to teach ‘new Awareness that was downloading and emerging’ for him.  I knew it was a safe place to explore one’s edges of consciousness, edges that had perhaps never been taught before.  It was like that for me also.  It was safe because there was a Field of Love…without an opposite.

As more and more of my path integrated the Maps of Consciousness, including the Spiral, Integral and the work of Dr. David Hawkins, I knew the Stages of Development that Russ and Don had brought into the Enneagram world to be essential in my own process of weaving the Vastness.

The initial experience of ‘seeing myself…sort of like for the first time’ flowed into the emergence of what some have called The Unique Self or The Elegant Self in my own life and my passion for exploring the Vastness in the Maps of Consciousness.

With Russ, the heart and the mind dance with pure delight.  Lunches at Zov’s with Kathleen or Richard or other friends become hours long.  We find our way into Mystery whether it is the emerging edge of Russ’s travels now teaching around the world, or sharing our fascinations and travels in places like Egypt, recognizing the inter-woven mysteries of ancient cultures and friends who have been our guides.

And sometimes…I stop to remember that it all began walking to lunch on a street in Santa Monica when the Universe happened to arrange it so that we would be in that moment at the same time.  It was when we would say ‘Yes’ to a possibility that would emerge into magic that would span continents and perhaps even lifetimes.

I wonder, sometimes, what are the connections to come???