I grew up in the cleft of a Cotswold valley on the edge of Bath, England. As an adult I spent decades traveling the world exploring spiritual teachings and learning from masters both East and West, including the nondual teachers, HWL Poonja, Chandraswami, and Nanagaru in India, the Mevlevi Sufis in Turkey, and the Orthodox Christian communities on Mount Athos in Greece.

My first book was published in the U.K. in 1990, and as of 2012, I have published twenty books, including three travel books, a novella,Chasing Love and Revelation, and the best-selling Ten Poems series, which began in 2001 with Ten Poems to Change Your Life and ended with the publication in 2012 of Ten Poems to Say Goodbye. Maria Sharapova, the tennis star, has called my book, Seven Sins for a Life Worth Living, (2007, Harmony) “one of the most inspirational books I have ever read.”

My work has been featured many times in The Oprah Magazine, in The New York Times, and in the Los Angeles Times. I moved from my native England to the Bay Area in 1998 and while I miss England at times, especially the landscape, I have found my home here and wake up thankful every day for the Bay, Mount Tam, and the wonderful community of creatives and spiritual explorers that have been attracted to this corner of the world. 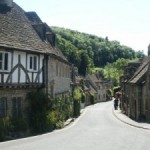 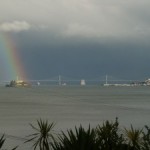 Castle Combe, near Bath, England The view from my window in Sausalito

Roger Housden has written so many wonderful books, many of which include some of my most favorite poems. I love his book ‘RISKING EVERYTHING, 110 POEMS OF LOVE AND REVELATION’. And taking one of his on-line writing courses was part of my INITIATION into the amazing Invisible Platform of the worldwide web.  My Intersections in Time with Roger Housden have profoundly imprinted in my heart and soul. Click here to read more.