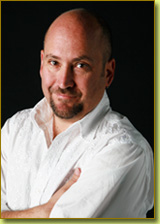 James has also produced seven music CD’s, and is the producer/director of five films, including the award winning “Indigo” and the upcoming “Redwood Highway.” He is also the founder of The Beloved Community, a network of spiritual peace ministers around the world, as well as the Seminary of Spiritual Peacemaking which has graduated and ordained over 500 ministers. James lives in Portland, Oregon.

Some times the Universe gives us multiple chances to ‘see’ it!  When James Twyman first came to Unity of Tustin many years ago, he came as a Peace Troubadour doing music and a workshop about his unfolding life.  Then the Universe sometimes simply emerges in ways that we could never have predicted or arranged.

It happened recently with the Universe bringing in Fabienne Meuleman, while she was in an in-between time in her life.  She ‘showed up’ to be part of Called By Love.  I was in my process of choosing twelve names.   The connection with James Twyman now completed.  Fabienne saw his name on my list and said ‘I know Jimmy Twyman’.  Sometimes links come back…when we miss them.

To read more… Click here or go to the Blog